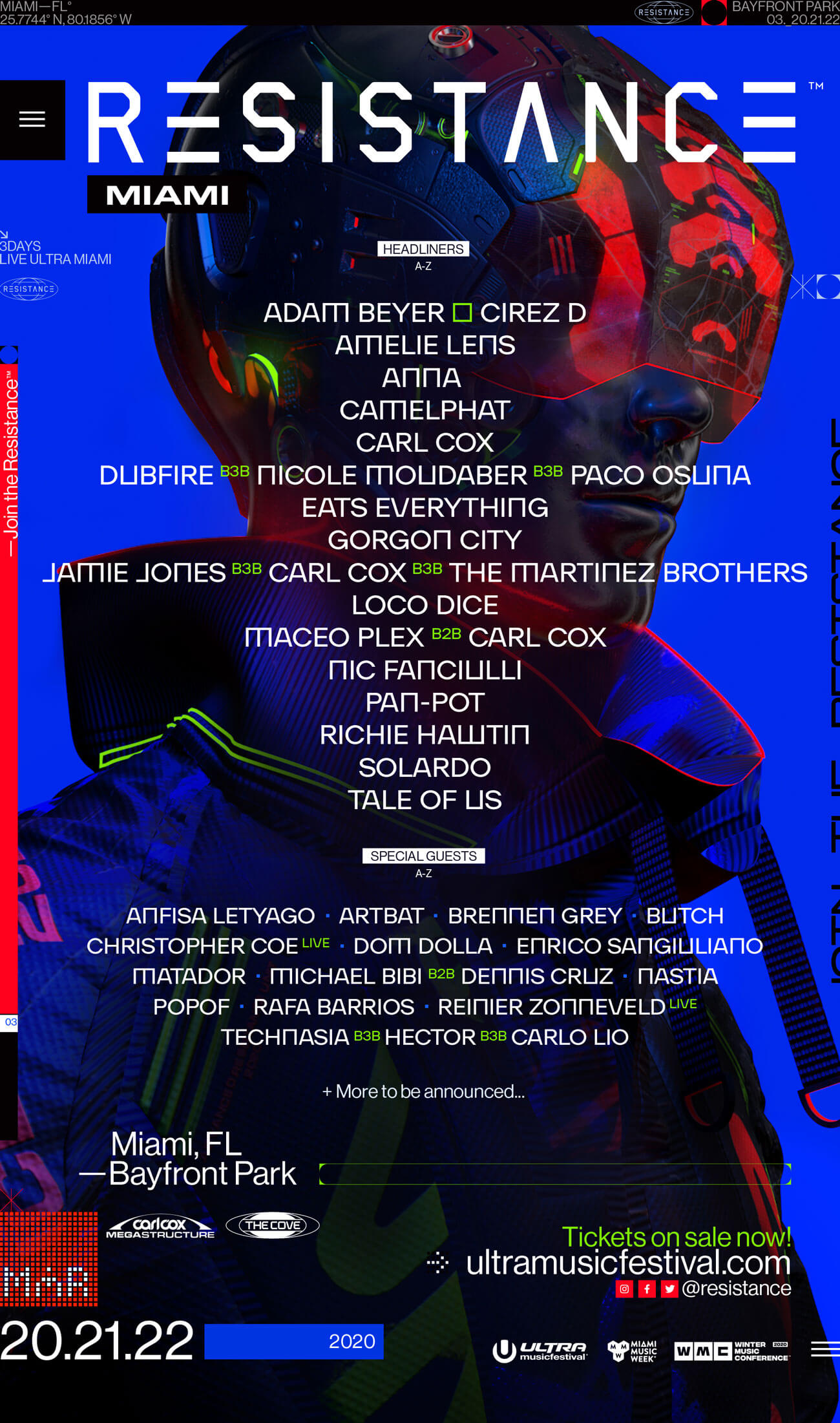 Following the impressive debut of the instantly-popular RESISTANCE Island on Virginia Key last March, ULTRA Worldwide’s esteemed house and techno brand RESISTANCE will return to Bayfront Park on March 20 – 22, 2020, with an impressive roster of talent and brand-new staging format.

Headliners including Richie Hawtin, Nic Fanciulli, Pan-Pot, ANNA and Eats Everything will deliver the expertly-crafted underground sounds that won over the hearts of more than 50,000 techno and house fans during RESISTANCE’s third annual nine-week Ibiza residency this summer at the world’s biggest nightclub, Privilege.

Beatport’s biggest selling act CamelPhat and raucous house duo Solardo will both return to RESISTANCE Miami for individual performances, following their stellar back-to-back from 2019’s festival. Berlin-based techno purveyors Tale Of Us and techno-meets-hip-hop hybrid master Loco Dice will also circle back for another year of underground groovage, while English bass-house duo Gorgon City will make their first Ultra appearance since 2015.

The RESISTANCE Special Guest lineup is the house and techno brand’s most ambitious to date. Parisian techno shapeshifter Technasia has spun back-to-back Ultra sets with Mexican techno authority Hector and Canadian tech-house beatmaker Carlo Lio individually in years past, but RESISTANCE will proudly welcome the worldwide B3B debut of all three forces combining behind the decks.

Taking residence on the northern perimeter of the newly revamped festival layout, RESISTANCE Miami will feature multiple areas, including the debut of The Cove. Dubbed ‘The Cove’ because of its unique waterfront positioning with Biscayne Bay to the east and Biscayne Boulevard to the west, this new stage, nestled perfectly under the palm trees in the heart of downtown Miami, will capture the vibe and spirit of RESISTANCE Island. The Cove will push forward new boundaries of imagination to expand upon the magic and energy that brought three days of underground bliss to tens of thousands of Seekers earlier this year.

With RESISTANCE firmly established on all six inhabited continents, RESISTANCE Miami promises to deliver an unparalleled house and techno experience to fans from around the globe.

Tickets are on sale now at ultramusicfestival.com